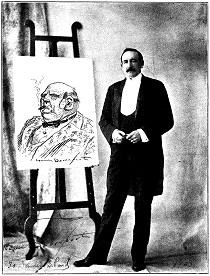 In 1897 while on assignment in Europe, Homer Davenport was introduced by African explorer Henry Morton Stanley to Major James Pond, the world-famous lecture manager. During this period of time, the “lecture circuit” provided a unique and varied form of entertainment: Listening to people talk on a variety of subjects.

Major Pond was a highly successful lecture manager whose clients besides Stanley included Mark Twain, Winston Churchill, and soon after, Davenport. As Pond surmised, Davenport was a natural. His subjects included the famous and powerful he cartooned, but also tales of his own early life, growing up in Silverton, Oregon. Many stories that eventually became his autobiography, “The Country Boy.”

So it seems fitting that a major portion of The Davenport Project will consist of a series of dynamic lectures, comprising the wide range of topics surrounding Davenport’s amazingly diverse life and times. These topics include but are not limited to:

Venues are to be determined, but will include the Portland metro area, Salem and of course Silverton. During the Davenport Community Festival, the lecture series will move to GeerCrest Farm for the weekend. Check back here for details. As they gel, we will post them here.