Preface to My Quest of the Arabian Horse (1908) 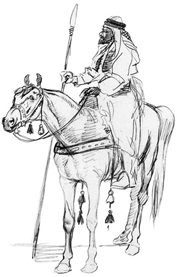 This book has not been written with any idea that it will add to literature. Indeed, my primary object in going to the Syrian desert was not to see things and then over-describe them in a book; I had no use for souvenir spoons or Turkish rugs. My purpose was but for one thing, and that was to obtain Arab mares and stallions of absolute purity of blood that I could trace as coming from the great Anazeh tribe of Bedouins. That was my fixed idea in undertaking the journey.

I had been deeply interested in the Arab horse for many years before I really knew anything about them. Then, when I thought I had begun to acquire some knowledge of the breed I found that I was not learning much. Information about them, obtainable in this country, was confusing; alleged authorities contradicted each other in every argument; the thing to do, it seemed to me, was to go myself to the home of the Arab horse and there learn of him from his master, the Bedouin.

The journey thus was undertaken also for my own education and that it was so successful (if I may be permitted to say so) is largely due to aid received from several influential quarters. I carried with me, for instance, letters from President Roosevelt, who, as a horseman, ranks with his standing as a man, and without which my errand would have been fruitless. From His Imperial Majesty, the Sultan of Turkey, I received an Trade, together with the courtesies of the Sublime Porte. In Aleppo I had the extreme good fortune to form a bond of true friendship with the venerable Ahmet Hafiz, himself the Prince of all the Bedouins. By him personally I was taken to the desert and personally he interested himself in my purchases of horses. Without him it would have been an accident if I had been able to purchase a single animal of absolute purity of blood. It was these unusual courtesies that brought success to the undertaking and to all that extended them a sincere and hearty acknowledgment is here made.

Thanks also are due and are here expressed to Charles Arthur Moore, Jr., and to the late John Henry Thompson, Jr., who were my companions on the trip and whose hearty co-operation was an invaluable aid in achieving its ends. Acknowledgments are also made to the Woman’s Home Companion for permission to reprint from its pages much of the matter and many of the pictures used in this volume. 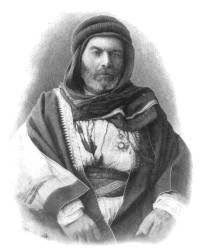 To repeat again what has been said above, my journey had this serious purpose in view— that by a judicious use of the pure Arabian blood, a breed of horse might be re-established as useful to mankind as was the Morgan horse when it was at its greatest. But, I had to get to the desert before I could purchase my horses and getting to the desert under the circumstances, proved even more interesting and romantic than I had expected. That may sound foolish. In these days, when an automobile honk-honks through the bazaars of Damascus, and when a trolley car clangs under the old city gate over the pilgrim road to Mecca; when you journey most of the way to Mecca itself on one railway and when you travel to the ruins of Baalbek on another, there does not seem to be much romance left.

But after you have been in the East for a while you will find, as I did, that all the hustle and bustle imparted from the Occident speedily become orientalized; there is always plenty of time at the other end of the Mediterranean.

It is always “Bookra” (tomorrow) there. A through “express” train stops to allow the passengers to see an exciting fight between two fellaheen on a threshing floor; during the combat the conductor offers to you or accepts from you a cigarette, and it is quite as often the former as the latter. Imagine the 18-hour limited slowing up because two farm hands near Palatine Bridge were having a set-to! Think of the Pullman conductor exchanging cigars with you! Even in Constantinople, where one might expect to find something of the energy of the West, the story is the same. You walk down the gangplank from the French steamer moored just above the north of the Golden Horn and—Bookra! Why be in a hurry? Is there not a Bookra? Curiously enough, after you have heard that dinned into your ears enough times you begin to say to yourself: “Of course I am not in a hurry. There is a Bookra.” And then you can really be part of the East.

When you get back to America you realize that this feeling has been more one of laziness and inertia than of romance. It has been, you are perfectly certain, just a response to your environment. You are apt to wonder how you ever could have yielded to it, but still you are ‘way sure that it was the only thing you could have done at the time.

Even now, writing in Morris Plains, I find myself thinking and almost believing that I am again in the desert. I smell its smells and hear its sounds. Under the tents of the Anazeh my companions and I sit in the evening silently drinking the salted coffee and smoking the pipe passed around from hand to hand; for half hours at a time no one speaks—we only hear the querulous jackals snarling over a bit of offal on the outskirts of the camp; once in a while some old Chief of the Tribe softly calls upon Allah.

Again in my thoughts I renew the bond of brotherhood with Ahmet Hafiz and begin all over again my friendship with Hashim Bey, the Sheikh of all the Sheikhs of the Bedouins.

It has been impossible for me, therefore, not to include in this book some of the romance of the desert and of the journey to it. I only hope that the stories of the happenings which interested me will interest those who may read what follows, even if thev are not horsemen.