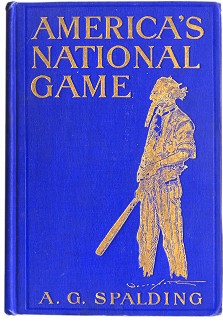 “Wheelhouse Images” (named for the baseball slang term that references “…a hitter’s power zone.”) is an exhibit of Homer Davenport’s baseball cartoons. He was commissioned by sporting goods magnate Albert G. Spalding to illustrate his 1911 book on the history of baseball, “America’s National Game.” The result was 17 unique images, in the well known Davenport style. These cartoons, along with the rest of the A.G. Spalding archives, are housed at the New York Public Library.

The reproduction fee for the cartoons, plus a unique photograph of Davenport, was donated by the Homer Davenport Community Foundation. High resolution scans were procured, and will be used to create the images for display. Dennis Sherwood of Portrait Express has volunteered to print the pictures on their high resolution digital color printing press. Sherwood, a member of the HDCF team, also volunteered his services to print this year’s Davenport and Strawberry Festival posters.

This exhibition kicks off with a First Friday reception in Silverton, at the Seven Brides Taproom, over the Homer Davenport Community Festival weekend in August, and continuing through the month of August. The reception will feature film archivist Dennis Nyback of the Oregon Cartoon Institute, who will offer a presentation on the history of Baseball in Oregon, and show some historic early baseball films. Along with the images, will be a published catalog of the exhibit, with descriptions and background information relating to each image.

Davenport, a longtime baseball aficionado since his teen years in Silverton, was a close personal friend to Spalding. He hired Davenport to illustrate the book with 17 cartoons, including the gold embossed cover of the early editions, (above).

It was published in 1911, and details the early history of the sport, (as interpreted by Spalding) . Much of the story is told first-hand, since Spalding had been involved in the game, first as a player and later an administrator, since the 1870s. In addition to his personal recollections, he had access to the records of Henry Chadwick, the game’s first statistician and archivist.

(Illustrations by Davenport from “America’s National Game,” the 1911 book on the history of Baseball by Albert G. Spalding. From the New York Public Library Spalding Collection.)

One Response to Wheelhouse Images