On August 3, 2019 during Silverton’s annual Homer Davenport Community Festival, The Davenport Project heads over to the Silver Falls Public Library for our next free presentation, staring at 1:30 (and repeating at 3:00), sponsored by the Silver Falls Public Library. On tap will be a lively and visually entertaining presentation, on the life and times of political cartoonist Homer C. Davenport, late of Silverton. 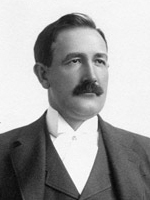 In the decade of the 1890s, just before the dawn of a new century, American society was going through a transition; from horses and trains to automobiles and airplanes. Change was everywhere. Through it all, Oregon-born cartoonist Homer Davenport was there, wielding his pen to spray a steady stream of caustic caricatures onto the notables and notorious of the global political scene.

Homer Davenport (1867-1912) was Oregon’s first media super-star. Born in Silverton, Oregon, into the pioneer Davenport and Geer families, he became a world traveler and developed a second career of breeding Arabian horses. His life is a story of fame, political influence, family connections, artistic creativity, and discovery. Yet, few outside his hometown are even aware of the impact this self-described “country boy” had on society.

His unique rural Oregon upbringing, along with a supportive and nurturing home life, equipped Davenport with the intellectual tools and the artistic skills needed to hit the ground running, in spite of—some would say because of—a lack of formal training. He arrived on the scene during a perfect storm of technology and public sentiment. One New York State Senator even sponsored a bill to outlaw political cartoons, because of the influence of Davenport’s work.

For this presentation, Davenport historian and Oregon Cartoon Institute fellow Gus Frederick will present a visual overview of Davenport’s art, life and times. With emphasis on the enabling reprographics technology of the era, as well as a snap-shot of Davenport’s contemporaries, Frederick will show graphically how the turn of the Twentieth Century was the golden age of the cartoonist and graphic illustrator. And how a small-town Oregonian occupied a major role. Also included will be an update on the eight recently acquired original Davenport cartoons, an exhibit featuring the City of Silverton’s collection of cartoons, and of course Silverton’s annual Homage to its favorite son, the Homer Davenport Community Festival.

Frederick is the creator of The Annotated Cartoons by Davenport, an annotated edition of Davenport’s 1898 collection of cartoons, as well as Silverton from Arcadia Publishing’s Images of America series. He also compiled the extensive social commentary of The Collected Works of T.W. Davenport, comprising Homer’s Oregon pioneer politician father’s writings from the Oregon Historical Quarterly. Additionally, he is continuing work on a video documentary of Davenport’s life and times.

The Silver Falls Public Library is located at 410 South Water Street, in Silverton. Doors open at 1:00 p.m. with the presentation starting at 1:30 p.m. and repeating at 3:00 p.m. Free and all ages are welcome!

One Response to Who the Heck was Homer?