In 1884, Presidential Candidate Grover Cleveland apparently visited Portland, Oregon during his campaign to become the first Democrat elected since since before the Civil War. As part of the celebration, the Silverton Trombone Band was invited to participate, and this event was documented by Homer Davenport, the band’s snare drummer, in his 1910 autobiography, “The Country Boy.” This would be Davenport’s first brush with national politics. Fielding “Uncle Jake” McClaine was the other half of the Coolidge-McClaine bank, and other various business and civic endeavors, including community benefactors—they gave Silverton its City Park. Davenport’s mention of the “barytone” refers to the instrument known as a “baritone horn” similar to a euphonium, and commonly known in brass band parlance, simply as a “baritone.” 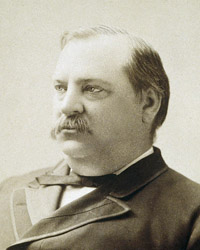 There was but one Democrat in Silverton, and he was one in every sense of the word. He hadn’t said much for years—just paid his bets regularly every four years without much back talk—but that fall when Grover Cleveland was elected for the first time, Jake McClaine’s voice lasted about half an hour. Then he wrote what he wanted to tell you on a slate. He wrote to the leader that he wanted to defray all of the expenses of the entire band to Portland the next Saturday night, where they were going to give Cleveland a big Democratic rally, and have electric lights. Of course, we accepted, as Jake McClaine had paid more toward the new instruments and uniforms than any other man in town.

We had to leave Silverton at three o’clock Saturday morning, and go in a “dead-ax” wagon twelve miles to Gervais, so as to catch the morning train on the main line of the Southern Pacific. I rode directly over the hind axle and lost the only gold filling I ever had up to that time. We got there at daylight and had breakfast that had been specially prepared for us, for which Uncle Jake paid. 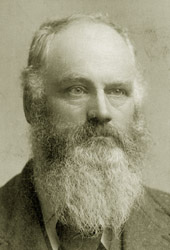 He wasn’t an uncle, but like “Aunty” McMillan, was fat, so everybody called him in Silverton, “Uncle Jake.” We took the Albany local, and by eight o’clock were in Portland, forty-seven miles from Silverton. It was the first time I was ever there without some one holding me by the wrist, and it seemed great. The uniforms kind of made us brave, and Uncle Jake marched ahead and we played as we marched up the main street, which was First Street. On the bass drum was printed in red letters, “Silverton Trombone Band,” and people would yell “Hurrah for Silverton!” while Uncle Jake would answer them by yelling “Hurrah for Cleveland!” Uncle Jake frequently sold cattle to the butchers there, so before we knew it we had stopped in front of a butcher shop, and were playing while he was in the back end of the shop selling cattle. From one butcher shop to another we went, playing all the time, and many of us marching in new shoes on the first cobblestones we had ever seen.

Finally in the afternoon we bought a box of apples for lunch. The day was dark and cloudy. In front of one shop Uncle Jake brought a butcher, who he said had bought more cattle than any of the rest, and he wanted us to play for this man, number eighteen in the new book.

Eighteen in the new book was the one piece of classical music which we bought when we got the uniforms. The only difference that it bore to the other quicksteps was that it didn’t go quite so fast, and about the middle of the piece it had sixteen bars rest for everybody but the barytone player, and from long and careful training we had reached a stage where we could play up to within a few feet of this sixteen bars’ rest and almost all of us stop simultaneously, at which point the barytone player would run a little scale that was called a cadenza, and we would all watch the leader’s head and when he nodded we would join in and finish out the piece. It was a pretty thing, and we told Uncle Jake we were holding it for the reviewing stand, where we wanted Cleveland to hear it; so he said all right, he would have the butcher there to hear it also.

After marching all afternoon and having our photos taken, the big parade started at eight o’clock. After marching in the parade until nearly midnight it came our turn to stop and play before the reviewing stand. Most of us were so sleepy we could hardly keep our eyes open, and the horn blowers were a sorry lot. Between their new shoes and their lips, they were about done up. Their upper lips hung out far and were purple. They looked like they had all got into a bee’s nest and had been stung on the lips. The leader cautioned each member that the supreme moment of our lives was upon us; that all the other bands were present, and that he thought Cleveland himself was.

He said, “Whatever you do, don’t play when you get the sixteen bars of rest; and you, there, with the snare drum, don’t roll out into that open space as you have always done before.” It was an awful moment. Uncle Jake was still to be heard bragging to everybody what a piece it was.

Finally, with the greatest difficulty, the piece was started. I thought I had a pioneer idea that they didn’t need me, and for fear of being accused of breaking down the piece in case they made a fizzle of it, I would quit as soon as we got started—and did. I just made motions without hitting the drum; but it wasn’t a new thought, as nearly every other member had done the same thing, so when we approached the sixteen bars’ rest the only one player was the leader himself, and he had the tremolo stop out. He stopped just as a large skyrocket went up. We hadn’t been used to fireworks—that is, big ones—and the only barytone solo anybody heard was the barytone player yelling to the man next to him, “Look quick, Tom, at that skyrocket!”

Uncle Jake directed the butchers he had brought down to hear number eighteen, to the fireworks, and we never resumed the piece, and never saw each other until we met the next day on the train bound for home. Aside from that one piece the trip was a great musical triumph, and Uncle Jake was the hero.