In the early 1960s, Homer Davenport’s sisters, Alice Davenport Bernard and Mary Delle Davenport Havens (right), gifted to the citizens of Silverton a number of original political cartoons, photographs and other artifacts from their famous brother. The cartoons have been on display in City Hall for decades, since they were donated to the Silverton Library, then part of the City of Silverton.

Main Street Coffee and Bistro in partnership with the City of Silverton will host a special exhibition of these eight original Davenport cartoons. The cartoons, dating from 1894 through 1904, will be displayed the upstairs gallery in the newly remodeled Wolf Building, located at 201 East Main Street, in Silverton Historic downtown core. All of the City Cartoons along with annotated descriptions will allow visitors to examine up close and personal, the artwork of Oregon’s First Media Super Star. The eight cartoons set to be displayed cover a period of time from 1894 through 1908. 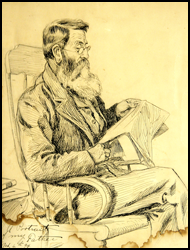 The oldest piece, is a portrait of Davenport’s father, Timothy, (left). It includes the note, “Portrait of My Father, October 6, 1894.” At this period of time, Davenport was firmly established with Hearst’s San Francisco Examiner, and was no doubt home visiting.

The next earliest, is an image of lame-duck president Grover Cleveland, sitting secure at work, with a Tammany Tiger-skin rug under his chair, being confronted by an old begger. A partial penciled-in title starts “To Busy…” Owing to Homer’s notoriously bad spelling, it most likely meant “TOO busy…” Probably done in late 1895 or early 1896.

Another Tammany-tied cartoon from around 1896 features Tammany Hall Boss Richard Croker, with his bags packed and ready to head off to his Irish estate, while stuffing the Tammany Tiger up his sleeve…

“Now for Prosperity” features House Speaker Thomas Reed (R-ME) and Congressman Nelson Dingly (R-ME) “shake down” Uncle Sam for the benefit of the corporate trusts. This cartoon was included in Davenport 1897 collection “Cartoons by Davenport.”

“God’s in it. We’re in it. There’s money in it.” Here we see Dollar Mark Hanna and the Trust Brute mugging a Cuban. From Davenport’s second published collection, “The Dollar or the Man?” published in 1899. 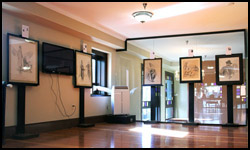 The final two cartoons date from around 1904, during Davenport’s post-Hearst period. Both feature person hand-written notes dated August 30, 1908. These he apparently gifted to Dr. Charles H. Brewer, an Oregon doctor and his wife Nettie Mae Brewer, during a visit with Homer, most likely in New Jersey. Mrs Brewer, (formerly Nettie Mae Munkers) was a school mate of Homer’s (albeit in an earlier grade level).

One features a ghostly Lincoln with his hand on old man’s shoulder, holding a newspaper reading “Parker’s Letter – I Will Revoke.” This is in reference to 1904 Democratic Presidential candidate Judge Parker, who vowed to revoke a pension extension passed as an executive order by President Roosevelt for Civil War veterans. The hand-written inscription says: “To Mrs. Dr. Brewer, who as a girl was my school mate. Me at one end of the classroom, and she at the other. (Those that know me will know which end I was). It’s with the greatest happiness that I give her this cartoon which bears a likeness of my father, he of whom all Silvertonians—yea Oregonians loved. [signed] HCD. Aug 30, 1908” Homer often used people he knew as models.

President Roosevelt on a stage with audience, handing his Message to Congress, over to House Speaker Joseph Gurney Cannon (R-IL). The hand-written inscription says: “To my dear friends Dr. and Mrs. Brewer who have made me so happy with just a visit, but after all, what is greater than a visit between old friends? Yours with Love, [signed] HCD. Aug 30, 1908”

The final image is a self-portrait of the artist, possibly done during the 1905 Lewis and Clark Exposition, owing to the appearance.

Eventually all of these pieces need to be re-framed in an archival manner to ensure their preservation for
the decades to come. Here is your chance to help the Homer Festival at the same time as helping to preserve history. By donating to the Davenport Cartoon Re-framing Fund, you will get the same tax-deduction as well as the knowledge that you have personally helped keep Davenport’s art safe and secure for future generations to enjoy. Plus you will be the first in line to view these restored pieces, when they are eventually displayed to the public.

Ask your Homer Day Contact about the Cartoon Re-framing Fund!