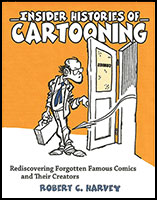 Editor’s Note: The National Cartoonists Society (NCS) recently held their annual convention in Portland, Oregon just North of Silverton. The weekend long affair for the most part was private, with strict security measures designed to keep the over zealous fan base at bay. The one exception was an open Sunday morning “Signing Event” where the cartoonists and authors offered their autographed wares for sale. As fellow Silvertonian Bob Foster was autographing my copies of his Moose series, I noticed a gentleman peddling a book entitled Insider Histories of Cartooning at the same table. This got my attention.

Turned out another Bob! Specifically R.C. Harvey, noted cartoon historian and “girlie” cartoonist. I quickly pulled out the bucks and set Mr. Harvey to work autographing his book, when he asked me how to spell my name. In reply, I showed him a copy of Annotated Cartoons By Davenport, and pointed. He quickly handed me back my money and offered to trade! Best deal I’ve made in years. I went to his Website and signed up for his Rants & Raves monthly column on Cartoon happenings. In his recap of the NCS event, he wrote the following nice and book review! Reprinted with permission.

Excerpt: “…this year’s signing event will doubtless change all that. It was a remarkably successful event with lots of civilians thronging the room and buying books and sketches … But the big event for me was when a bearded Gus Frederick wandered by and was about to buy a book when I noticed he had a book about Homer Davenport under his arm. Davenport is one of the giants of editorial cartooning in the first decade of the 20th century, but virtually nothing has been written about him. Frederick’s book reprints a 1897 book of Davenport cartoons with annotations that explain their significances; I’ve reviewed the book at greater length down the Scroll. Seizing upon this find, I quickly traded Frederick a copy of my Insider Histories of Cartooning for a copy of his Davenport. And a good time was had by all…”

DAVENPORT is one of the great names in American editorial cartooning, but almost nothing has been written about him—nothing, at least, approaching the scholarship that Frederick displays in this volume. Born in 1867, Davenport grew up drawing all the time near Silverton, Oregon, and eventually, after numerous false starts, he wound up cartooning in San Francisco for the Chronicle, until William Randolph Hearst finally hired Davenport for his Examiner by tripling his Chronicle salary.

Davenport was part of Hearst’s team that took over the New York Journal in 1895 and helped launch “yellow journalism” in competition with Pulitzer’s New York World. Davenport became famous during the presidential contest of 1896, depicting candidate William McKinley’s manager, wealthy industrialist Marcus Hanna, wearing “plutocratic plaid” with a tiny dollar sign in each square, accurately pinpointing the real issues and interests of the campaign. The cartoonist’s work was fierce enough on politicians that it inspired a failed anti-cartoon bill in the New York State Assembly. In 1904, one of his cartoons of Uncle Sam with his hand on the shoulder of Teddy Roosevelt is said by many to have enabled TR’s election. Davenport also bred American-born Arabian horses and wrote a book about it.

On April 13, 1912, Davenport was sent to illustrate the sinking of the Titanic. He contracted pneumonia waiting to interview the survivors and died on May 2.

Two volumes of his cartoons were published during his lifetime—Cartoons by Davenport in 1897 and The Dollar or the Man in 1900. He wrote an autobiography, focusing on his youth in beloved Silverton, The Country Boy (1910). The only biography I know of is Homer Davenport of Silverton: Life of a Great Cartoonist by Leland Huot and Alfred Powers (West Shore Press, 1973), which is a fairly relaxed and casual anecdotal account of his life, mostly chronological but not entirely. Almost half of its 400-plus pages are pictures—photos of Silverton and elsewhere and Davenport’s cartoons. The quality of reproduction is, however, poor. In Frederick’s book, the pictures are superbly reproduced, the finest lines meticulously captured.

In reprinting the 1897 volume of cartoons with extensive annotation, Frederick has performed a monumental service for all students of editorial cartooning in America. The original book printed only cartoons with no explanation. Herein, each cartoon, all from 1895-1898, gets a full page, and facing it is a page of text, explaining who the victims of Davenport’s pen are and what their significance is at the time. Frederick told me he is at work annotating the 1900 [The Dollar or the Man] collection.

Only a few of the cartoons consist of metaphorical messages in the modern manner; most are caricatures that exaggerate and distort their victim’s features, making them all seem highly questionable persons. I’m posting only a few hereabouts, including Davenport’s 1896 portrait of his boss, W.R. [Hearst] himself—a friendly, even complimentary, picture that may well be the most familiar of Davenport’s works: it shows up often in histories of journalism.

—Review by R.C. Harvey in Rants & Raves, his monthly online magazine of comics news and reviews, cartooning history and lore, at RCHarvey.com