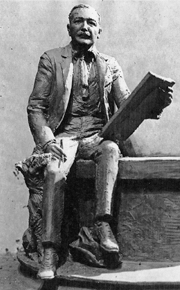 After Homer C. Davenport passed away in 1912, a group of his friends pursued the notion of honoring Oregon’s first media superstar with a suitable monument. A statue was proposed, possibly due to the fact that Davenport’s half-sister Adelaide was an up and coming sculptor herself. A proposal was put forth for an integrated statue and fountain, to be placed in downtown Silverton. Adda, as she was known completed a bust of her famous brother, and then contacted one of Homer’s artist friends, the noted sculptor S.J. Farnham. Farnham’s small “sketch” of the final design is shown here (right).

Sally James Farnham (1869-1943) is arguably best known today for her Simon Bolivar monument in New York’s Central Park. Yet she had a long career producing a wide-range of sculpture ranging from portraits, trophies, medals, plaques and various studio works. Special care has been taken in highlighting works not often associated with Farnham studio. Though “untrained” in her craft technically, she achieved the acclaim and notoriety that few “trained” artists ever achieve. – From the Sally James Farnham Website

Davenport met Farnham through their mutual friend Frederic Remington, and Homer’s later partner Zadah Reakirt. All four also shared a love of Arabian horses, and were frequent guests at Red Gables, the Davenport Farm in Morris Plains, N.J. Adda no doubt met Farnham there, and established a connection and friendship that remained for years.

The Davenport Statue campaign was launched in 1914, several years after Homer’s passing, and was gathering steam when World War I intervened. After the war, the momentum for the statue was lost, so that by the time the Twenties roared onto the scene, there were only sufficient funds to construct a robust marble marker instead of the originally proposed statue and fountain. This was done, and included an engraving of the cartoon Davenport drew after his father passed away in 1911.

Over the years, Davenport’s memory faded from view. But the idea of a statue keeps coming up. As new generations discover the life and times of Homer Davenport, maybe the time is once again ripe to float that notion! And now with the City of Silverton’s acquisition of the Eugene Field School site, maybe that time has come! A proposal will be made at the various community meetings planned around the new development. Stay tuned!