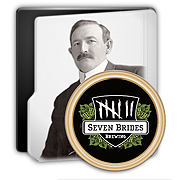 For the next “Dining in the Dark” Forth Sunday Candle lit Dinner at the Seven Brides Taproom in Silverton, The Davenport Project’s chief lecturer will give a recitation of the classic American poem, “Casey at the Bat.” If time and the audience permits, we may offer up the Garrison Keillor “Road Game” version as well.

Davenport, a longtime baseball aficionado since his teen years in Silverton, was a close personal friend to Albert Spalding, the sporting goods magnate. He hired Davenport to illustrate his 1911 baseball history book, “America’s Favorite Game” with 17 cartoons, including an homage to “Casey” and the orator that first made it famous, De Wolf Hopper.

The poem was made famous by the late 19th century comedian De Wolf Hopper, who made “Casey” his signature piece. Like Davenport, Hopper is relatively unknown today. His son Bill Hopper on the other hand, is fondly remembered on re-runs of Perry Mason, as the private detective Paul Drake. Below is the back story of Casey, from the Baseball Almanac Website. 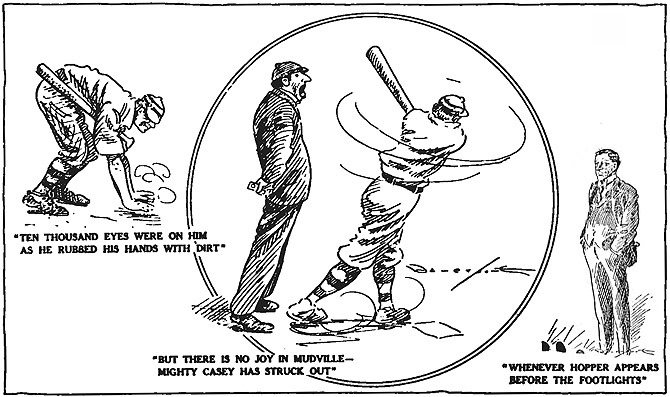 Casey at the Bat by Ernest Thayer

It all started in 1885 when George Hearst decided to run for state senator in California. To self-promote his brand of politics, Hearst purchased the San Francisco Examiner. At the completion of the election, Hearst gave the newspaper to his son, William Randolph Hearst.

William, who had experience editing the Harvard Lampoon while at Harvard College, took to California three Lampoon staff members. One of those three was Ernest L. Thayer who signed his humorous Lampoon articles with the pen name Phin.

In the June 3, 1888 issue of The Examiner, Phin appeared as the author of the poem we all know as Casey at the Bat. The poem received very little attention and a few weeks later it was partially republished in the New York Sun, though the author was now known as Anon.

A New Yorker named Archibald Gunter clipped out the poem and saved it as a reference item for a future novel. Weeks later Gunter found another interesting article describing an upcoming performance at the Wallack Theatre by comedian De Wolf Hopper – who was also his personal friend, (illustration right, by Davenport). The August 1888 show, exact date is unknown, had members from the New York and Chicago ball clubs in the audience and the clipping now had a clear and obvious use.

Gunter shared Casey at the Bat with Hopper and the perfomance was nothing short of legendary. Baseball Almanac is pleased to present the single most famous baseball poem ever written.

“Love has its sonnets galore. War has its epics in heroic verse. Tragedy its sombre story in measured lines. Baseball has Casey at the Bat.”
– Albert Spalding