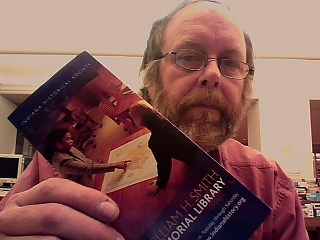 A successful research “fishing expedition” in Indianapolis at the W.H. Smith Memorial Library of the Indiana Historical Society. Mr. Paul Brockman, Director of Manuscripts and Visual Collections, got me pointed in the right direction. I spent last Friday in the research room pouring through letters, scrapbooks and photos from the collections of William Henry Smith, first cousin to T.W. Davenport, and Smith’s nephew, Charles Warren Fairbanks.

Besides being directly related to the Davenport clan, Mr. Smith and Mr. Fairbanks, were both were quite prominent in their own right. Smith was a founding partner of the Associated Press, and Fairbanks a prominent Indiana politician, and eventually Vice President under Theodore Roosevelt. Digging through the archives, I found three pictures of T.W. Davenport (one listed as “unidentified”), a picture of Homer’s Ma Flora and his sister Orla at the age of seven.

I also found a mention in a letter to W.H. Smith from his brother Charles Warren Smith (their nephew’s namesake), while he was in San Francisco in 1891. He mentions that Homer is “…in town attending art school in preparation to work on The Examiner.”

And several items from the Fairbanks scrapbooks about Homer’s attendance at a swanky dinner he and Mrs. Fairbanks were holding for President Theodore Roosevelt. The dinner was held on December 19, 1908. This was just seven days after Homer had sent a letter to Fairbanks informing him that he and Daisy had been separated for two years, and they would no longer be attending any social events together. Apparently Homer went by himself! Another news item, from the New York City Club Fellow dated December 23 on the next page references Homer’s attendance, with a rather “snarky” comment at the end:

“Mr. Homer Davenport, one of the esteemed guests of the dinner recently tendered the President and Mrs. Roosevelt by Vice-President and Mrs. Fairbanks, managed to get in a few words as to the desirability of the Arabian stallion for long-distance stunts in the Army. Homer has a quaint way of going about the thing. What will the rake-off be, Homer?”

I did manage to get a brief video statement from Mr. Brockman, as well as some great cut-aways from the top of the “Indianapolis Circle” Civil War monument, as well as Vice President and Mrs. Fairbanks’ memorial in the near-by Crown Hill Cemetery.

I also realized that Homer had included an image of his famous cousin the front of his 1898 book “Cartoons,” in the background of the picture entitled “An Interview with Senator Hanna,” (right). Fairbanks was a U.S. Senator at the time.

The next day, my host and Navy Buddy Mark drove us both to Richmond, Indiana to visit the location of the famous Starr Piano  and Gennett Record Company, “Birthplace of Recorded Jazz.” No Davenport connection, but relevant to the history of antique phonographics.

All in all a quick but delightful visit! Thanks again to my Hoosier hosts, Mark and Kirsten Fredericks, (plural – no relation).