Silverton, OR: The Seven Brides Taproom in Silverton, Oregon hosted the first official event of The Davenport Project. On Sunday evening, January 29, The Taproom presented it’s first “Dining in the Dark” special evening.

“Several months back, Silverton experienced a power outage that lasted several hours;” explained Seven Brides owner Jeff DeSantis. “We had candles and a gas grill, so we made the best of the situation, and folks loved it! So we decided to make a monthly special out of it!” he added.

During the evening, the electric lights were turned off in favor of candles, oil lamps and lanterns, imparting a sense of “Homer days” from the 1800s onto this heritage dining experience. 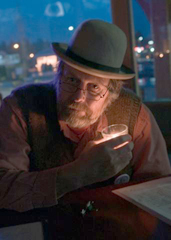 Into this mix, Gus Frederick from The Davenport Project presented a dynamic reading of “Homer Davenport – By his Father.” Written in 1899 for the magazine, “Oregon Native Son,” by Timothy W. Davenport, Homer’s father, it offered an interesting glimpse into the minds of both Davenports, the younger and the elder.

1899 was midway through Homer’s all too short career, which spanned just two decades. T.W. recounts Homer’s early years with recollections of growing up in Silverton, his mother’s influence as well as the cult of myth that had already started to grow up around Homer’s meteoric rise to fame. This was a year after the publication of Homer Davenport’s first book, “Cartoons by Davenport” and a year before his next, “The Dollar or the Man?” 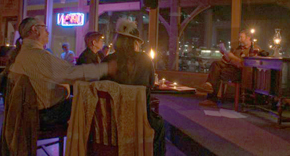 Frederick paced his presentation with a musical interlude prior to and midway through the reading, provided by period music originally released on shellac analog audio disks, (78rpm records), played back on Frederick’s Orthophonic Victrola acoustic gramophone.

For the first quarter century of recorded music, gramophones and phonographs used spring-wound motors and a hollow “tonearm,” that reproduced the music mechanically without electricity.

Analog audio disks for the evening included “Moving Pictures at Pumpkin Center” by Cal Stewart (COL 78466/A1797); “Palestina” by the Original Dixieland Jass Band (VIC 18717-B); “Stars & Stripes Forever” by John Philip Sousa (VIC 35709-A) and more! Special thanks to the Wolverine Antique Music Society, (WAMS) for use of the Hardware and Software for the evening…

Stay tuned for additional events, coming up in the months to come. We will be taking The Davenport Project on the road to the Jack London Pub in Portland as part of they’re growing history lecture series. And coming early April, will be our “Davenport Dinner on the Farm” to be held at Homer’s Grandparent’s donation land claim and Marion County heritage center, GeerCrest Farm and Historical Society. Seating will be limited! Details to follow…