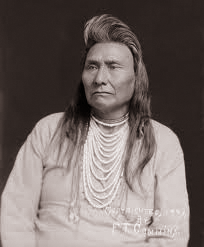 In 1903 Nez Perce Chief Hin-mah-too-yah-lat-kekt, also known as Chief Joseph, visited President Theodore Roosevelt in Washington, D.C. Apparently he first visited New York City, where he was interviewed by the media of the day. One such interview was performed by fellow Oregonian, cartoonist Homer Davenport, then working for William Randolph Hearst’s New York American. Davenport was a “value-added” artist, who often wrote his own features that he likewise illustrated. And once again, another unique glimpse is offered into the background of this “simple country boy.” Like the fact that he was apparently semi-fluent in “Chinuk Wawa,” the Chinook jargon. His reference to his Uncle John Davenport is also interesting. The town of Davenport, Washington is named for “Uncle John.”

Chief Joseph, a voice of conscience for the West and his people, died less than a year after Homer’s interview, still in exile from his homeland, according to his doctor “of a broken heart.” This piece of Davenport trivia comes to the Project courtesy of Davenport researcher Barry Bernard of Portland. It was reprinted in the Morning Oregonian, on Saturday, October 10, 1903. The photo of Chief Joseph was taken around the same time as the interview in 1903, by F.T. Cummins, (from the First People Website). Davenport’s portrait comes from a second generation Xerox copy printed from microfilm. And since this was manually transcribed, (by me!) from the a fore mentioned Xerox copy, I may have gotten some characters scrambled, especially in the Chinook passages.

In 1879, I was in Colfax, Washington, at that time one of the thrifty towns of the Northwest, a town threatening to be a city, a center in those days for all the Indian trade of the Palouse District. This day I have in mind was a perfect day. The sky was apparently a million miles high and the blue was that of the Mediterranean. A breeze was blowing, but I don’t recall which way.

Anyway, the day was perfect, and about noon my uncle, then the leading merchant of that place, called my attention to a great cloud that was visible up the valley some three miles or more away. He said, “What is it?” and after some moments gaze I pronounced it a storm cloud. “No,” he said, “It’s some Indians bring two or three hundred wild horses in for me to see, and that’s the dust they are raising.”

The old Indian sat on his pony facing a spotted stallion. On him he kept his eyes for a few moments, as this horse was a leader, and when he became quiet, all were quiet, or where he went all others would follow. Uncle John was very mad. They had torn through Mr. Cooper’s garden in mistake for a street, and as a result Cooper’s garden was now a street and nothing more. Uncle went up to the old Indian, who was all smiles, and said, “Platote, confound you! I thought I told you not to bring these horses in. Keep them away. I never want to see them again, or you either.”

The old Indian, still smiling, shifted in his saddle and said, “Now witka now witka, hias skookum tennas cultan,” meaning “I understand, I understand, but I wanted to show you the fine little colts.”

“I know,” said uncle, “but don’t bring then in any more. They tear down fences, break the sidewalks and some day they’ll run over some child, and then they’ll hang you. If you love me take them back to Snake River and keep them there.” At this point I saw uncle drop a $5 gold piece quietly into the old Indian’s prepared hand as quick as you would tip a policeman. Then uncle left in disgust and went to the store, while I remained with the old Indian.

I always remembered the name of old Platote, though I never saw him but that once. Yesterday I had an appointment with the management of Madison Square Garden to see and have an interview with Chief Joseph, the greatest chief the Nez Perce (Pierced Nose) ever had, and more than likely the greatest Indian chief now living, the greatest war general, greater than Geronimo, because Joseph never considered cold-blooded murder warfare.

The gentleman who arranged my interview with the chief said the old man couldn’t talk, and he disliked interviews. I came at the appointed hour and brought a child along to see if children meant anything to this Indian. [No doubt one of Davenport’s own children.]

As we entered his room in the Garden, the old chief arose from a blanket on the floor alongside of a bed; he had been resting, as the bed evidently tired him. As he arose he grew more and more in a dignified way, like an old Indian Hamlin Garland once told me of that grew in his estimation till he looked 17 feet high, and so as Chief Joseph straightened and reached out his long right arm to be shaken, he looked like a great Roman senator in bronze. He frowned with his brows, but his lips smiled, that he might make me feel more at home. 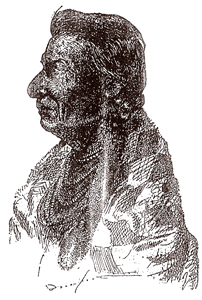 But to draw and talk to a solemn old chief, 85 years old, made doubly melancholy by the presence of tall buildings instead of tall mountains, who had closed up tight as a clam, was something not at all easy. I thought of a chance. I remembered my uncle had bought his [Chief Joseph’s] horses, and that in his general merchandise store he had trusted all of the Indians over which this man had once ruled. Perhaps he might remember, so I asked him in jargon, “Do you know John Davenport, at Colfax?”

In my joy I happened to think of old Platote, and I asked if he knew Platote.

Instantly the old chief, who had again become a boy, stood up. “Platote,” he exclaimed over and over, in loud, deep tones. Then he asked if I knew Platote, and I told him yes. He shook with laughter. The other Indians in the room all laughed and said Platote. Finally from a roll of red blankets that lay on the floor in the corner of the room came a grunt and the muffled words, “Charley Platote, hi youtl quitan.”

Gayety reigned for many minutes. Indians laughed that hadn’t smiled since they left their tepees in the far Northwest. The old Indian peeked out of the blankets that he might see the old friend of Platote. I asked if Platote was still alive. “Yes” the chief said, “and he is still herding horses.”

I was in the midst of a drawing by this time of the old chief’s face, when he burst into a noiseless laugh. Turning to Chief Red Shirt, he talked in a different language about a minute, and the only word I caught that I understood was “Platote.” I asked the interpreter what he said. He said to Red Shirt, “What kind of world is this? We come away from Indian country and come through mountains, then pass more Indian country and come through days of great wheat fields, then come where everything is corn, and pass through some big cities, and then come way here among these high buildings and find a man who knows Charley Platote, the Nez Perce horseman.”

The expression on the chief’s face changed noticeably into that of deep melancholy. He was more dejected than he was a few minutes before he had been so happy. He stood up over six feet and trod back and forth with bowed head. He was a grand sight, although a dejected person.

Chief Joseph, a pure Indian of the Nez Perce tribe, is past 85 years old, but looks 50. His skin is a s soft as satin, though his flesh is hard and firm. He is the type of man and art where the work of A.B. Frost stops and where that of Frederic Remington begins. On the other hand, you get melancholy when you see a great, broad-minded man like Chief Joseph. You see a man representing a race that were not dealt with as they should have been. This prisoner of war was never charged with cruelty. The only charge against him was that as he was ordered from his home and the hunting ground of his ancestors before, he said, “I don’t want anything the white man has. I only want to be let alone and let live in the beautiful Wallowa Valley, where my ancestors lived and died, and where my boyhood days were so happily spent.”

Notwithstanding this simple plea from a just and honest Indian, the troops came to take him to a reservation and he naturally fought, and when he fought, he fought in a manly, dignified way, and had he had as many warriors as we had he would have caused our Generals to blush. As it was, he proved almost a Napoleon. He rightly figured that the whites and the progress of civilization might have spared to him the beautiful little valley at the junction of the Wallowa and Snake Rivers, in Eastern Oregon. There he could live as he had always lived at the head of his tribe, a well-behaved band of Indians.

The buckskin smell and the odor of a wilder country had made me homesick and blue, and as I started to leave the room, as I passed the dignified old Chief to say goodbye he said that I had made him feel very bad, but he was here where the houses are “slah, slah,” pointing to the sky, and at the railroads were “slah,” and that the mention of old Platote had made him homesick. “Hi youtl homesick.”