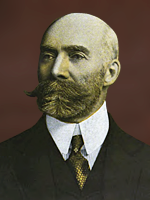 In 1904, the New York-based “Success Company” published a book entitled “Little Visits with Great Americans or Success Ideals and How to Obtain Them.” It was edited and written by Orison Swett Marden (right), who is described by Wikipedia as “…a spiritual author in the New Thought Movement.” This volume contains numerous sketches of successful folks of the era, comprising a wide range of backgrounds. “Successful” authors, politicians, actors and even cartoonists, had short interviews or biographical sketches of them.

What follows is Marden’s interview with a now very successful Homer Davenport, at his home in East Orange, New Jersey in the Roseville neighborhood. Of interest is the reference to Homer’s sister, who could have been either Alice or Adelaide. Davenport’s own self-depreciation enters in also, as he relates getting fired from various newspapers, but lands other jobs on other papers for more money. Of particular note is his comment that he worked for the Oregonian for “…just a day.” Davenport researcher Barry Bernard uncovered a steady-stream of Davenport illustrations from March through September, 1890 in the Oregonian archives. The interview and images are from Google Books, the great new research resource.

Rebuffs and Disappointments Fail to Repress a Great Cartoonist’s Genius.

To-day Homer C. Davenport is the “first cartoonist” of America, and yet he is but thirty-five years old. Mr. Davenport has a small place in Roseville, on the outskirts of Newark, New Jersey.

He is a tall, handsome man, with large, humorous eyes, beneath heavy eyelids, that give him an expression of perpetual thought.

“I suppose you want to see my studio?” Mr. Davenport said. We went upstairs.

“This is it,” he said, with a chuckle. It was merely a small, square room, with a few framed pictures on the papered walls, and a desk in the corner. There was no easel in the room, but I saw a drawing-board under the desk.

“You work on that board, when on the desk?”

“You are disappointed,” said his sister, with a smile. “It is not what you expected.”

It wasn’t. I had expected to see a typical studio, with unfinished cartoons, and the usual artistic surroundings.

Mr. Davenport laid an unfinished cartoon on the desk, representing a chariot race, and laughed when he explained what it would be and mean; and this told me that he enters heartily in whatever he draws, which is requisite to success in art as well as in other things. Then we adjourned to another room and sat about a wood fire.

“Tell me of your beginning,” I said.

“Well, I was born in Oregon, thirty-five years ago, on my father’s farm. As a child, I was perpetually drawing, and to my father I owe much, for it was he who encouraged me, my mother dying when I was very young. I would lie flat on my stomach, and draw on the floor, if I had no paper. As I spent hours this way, the habit became injurious to my digestive organs, so a flat cushion was made for me. I was a hopelessly poor student, doing more drawing on my slate and on the margins of my books than studying. To sit in school for any length of time made me sick and nervous, so my father called on the schoolmaster and gave instructions that, whenever I got tired, I should be allowed to draw, or to go home.”

He Drew Cartoons in School.

“This was rather demoralizing to the school, for even then I drew cartoons. Finally, I was taken away, and my father painted a blackboard, four feet high by fifteen feet long, on the side of a room in the farm­house, where, with plenty of chalk, I drew to my heart’s content. I would draw all day.”

“And you received no instructions in drawing?”

“I never had a lesson in my life. It was my father’s ambition for me to become a cartoonist. When, in later years, I did anything that he considered particularly good, he would carry me off to Portland, and I would submit it to the Portland ‘Oregonian,’ where my attempts were always laughed at. Then, much crest­fallen, I would return to the farm.

“‘Now, my boy,’ my father would say, ‘that is good enough to be printed,’ and off I would go again.

“At length, the news spread that I had a job on the Portland ‘Oregonian.’ The whole town became interested, and when the day arrived for my departure, the band of which I was a member, and many of the towns­people, escorted me with due honor to the railroad station.”

“‘Well, I heard some say, ‘I guess we will never see him again. He’s too big for this place.’

“I was on the Portland ‘Oregonian’ just one day.

“’What’s the sense of this?’ I was asked. ‘You can’t draw,’ and back I went.  ‘I had before me the mortification of meeting the righteous disgust of my friends. On my way back to Silverton, I heard that they were short of a brakeman at the Portland end, so I beat my way back to Portland, and, walking into the office, offered myself.

“’What!” said the man. ‘What do you know about braking? I would like to know who sent you on such a fool’s errand?’ and he raved and stamped, and swore he would discharge everyone on the train. But on the next train, I went out as head brakeman. All the elements got together, it rained and snowed and froze, and when I got to Silverton, almost frozen, I slipped from the train and tramped home, a much disheartened young man.

“But just to show my father I had something in me, and wanted to make my way in life, I asked to be sent to an institution of learning, where I stayed just one week. Then I got a place attending to the ink roller in the local printing office, where the town paper was published, which, to this day, I do not think can be beaten,” and Mr. Davenport laughed in his hearty way.

At Ten Dollars a Week.

“Finally, my star rose on the horizon. I went to San Francisco, and was taken on trial on the ‘Examiner.’ I remember the day well,—February 2, 1892. For one mortal week, I simply hung around the office. Then I was put to work at ten dollars a week. But I proved unsatisfactory. I drew the man over me aside.

“’Look here,’ I said, ‘I can’t draw. I want you to write to my father and tell him what a failure I am, and that his belief that I am an artist is the delusive mistake of a fond parent. He sat down to write, and, as he was doing so, my fingers, always itching to draw, were at work with a pencil in sketching horses, on a piece of paper on the table.

“’When did you do that?’ he asked, picking up the paper.

“I did it just now,” I replied, sheepishly.

“I did so. He looked at me curiously.

“’Davenport,’ said the manager, ‘you are too old to strike a path for yourself. You must put yourself in my hands. Do nothing original, not one line.’ If the manager caught me doing so, he tore it up.

“I remember one time, Ned Hamilton, a star writer on the ‘Examiner,’ some others, and myself, were sent to a Sacramento convention. I drew what I considered very good likenesses, and that night, when I retired, with a fire burning brightly in the room where we all bunked, I fairly kicked my heels in delight, in anticipation of the compliments of the ‘Examiner.’ I was awakened by the tearing of a paper that sent the cold shivers up and down my back. Ned Hamilton was grumbling, and throwing my labor into the fire.

“I almost wept, but it took any conceit I might have had out of me, and the next day I did some work that was up to the mark.”

He was Discharged in Chicago.

“But my walking papers came in due time, and I went to the ‘Chronicle.’ It almost took my breath away when they offered me twenty dollars a week. Before I was discharged from there, I had risen to a higher salary. I went to Chicago, and got on the Chicago ‘Herald,’ at thirty-five dollars a week. I was there during the World’s Fair. It seemed to me the principal thing I did was to draw horses. But the greatest blow of all was when the Chicago ‘Herald’ discharged me. It seemed as if everything were slipping from beneath my feet. I went back to San Francisco and got on the ‘Chronicle’ again. It was then, and not till then, —1894, —that I was allowed any freedom. All that I had been asking an outlet for found vent, and my cartoons began to attract attention.

“William R. Hearst, of the ‘Examiner,’ asked, in one of his editorial rooms: ‘Who is that Davenport, on the ‘Chronicle,’ who is doing us up all the time?’

“No attention was paid to the order. Mr. Hearst finally sent for me himself. I was engaged at forty­five dollars a week. Then a thing happened that I will never forget, for no raise before or since ever affected me to such a degree.

“I drew a cartoon of Senator ‘Steve’ White and his whiskers. The whiskers so pleased Mr. Hearst, that he called me in and said that my pay would be raised five dollars a week. I went home that night, and woke up my wife to tell her the glad news. She fairly wept for joy, and tears trickled down my own cheeks, for that increase meant appreciation that I had been starving for, and I felt almost secure, —and all on account of Senator ‘Steve’ White’s whiskers.”

Here Mrs. Davenport, who had brought us two large books, in which she had fondly pasted all of her hus­band’s work, said:­

“Yes, no subsequent increase, no matter how large, has ever equaled that five-dollar advance.”

In Clover at Last.

Mr. Hearst, as soon as he bought the New York “Journal,” telegraphed to the “Examiner:” “Send Davenport.” He is now receiving a very large salary, and his work is known throughout the world.

Two years ago, Mr. Davenport went abroad and drew sketches of the members of the houses of parliament, and Mr. Phil May, the English artist, became his fast friend.

In Washington, Senator Hanna insisted upon meeting Mr. Davenport, and shaking him by the hand. He was the first to immortalize Mr. Hanna, with that checkered suit of dollar marks.

Such is the man and artist, Homer C. Davenport, who, in 1894, had not drawn a public cartoon, and who, today, has a world-wide reputation, and the esteem of even those whom he has caricatured, and who cannot help enjoying their own exaggerated portraits. Davenport’s success has come rapidly, but not until he had sustained reverses that would have discouraged any man of a less resolute character.