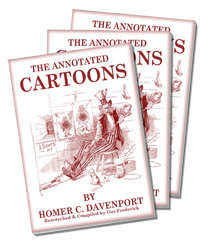 Update: With Homer Days here, the Annotated Cartoons is finally a reality! The Kickstarter premiums are being assembled, and will be available for pick-up this weekend in Silverton. For our out-of-state backers, your packets will be mailed out at the same time. The author will be on hand to sell and sign copies. Noon to 2:00 on the loading dock of the Historical Society’s Depot Annex, and out at GeerCrest Farm on Sunday.

A little after 7:00 am on July 1, the Kickstarter Fund Raising Project for The Annotated Cartoons by Davenport successfully wrapped up. Over the course of 30 days, dozens of folks from around the country, contributed varying amounts of money, to help get 200 copies of the second revised edition produced.

The main action that put us over the top occurred 24 hours earlier, when Dr. Michael Kim, DDS, of Silverton, pledged the balance of the amount needed in the name of Dr. Kim’s No Cavity Kids Club. The amount was just shy of $1,300, and insures publication. Thanks Doc!!!

In 1898, Homer Davenport published Cartoons By Davenport, a collection of over 80 cartoons which originally appeared in William Randolph Hearst’s New York Evening Journal. It was a large format work, with hardbound cover and an introduction by Senator John J. Ingalls, (R-Kansas).

In 2006, Davenport historian Gus Frederick researched, compiled and reprinted a fully annotated edition of this historic work. The faces and the issues behind Davenport’s witty, satiric caricatures were teased out in a cartoon-by-cartoon commentary. However, due to the costs associated with the production, this edition was limited to just 100 strip-bound copies.

We are coming to Kickstarter to raise funds to make possible an updated, revised edition of the 2006 reprint.

Using state-of-the-art print-on-demand technology, this soft-cover perfect bound annotated edition will provide commentary which add historical context to these amazing images. Funds are needed to purchase and register our ISBN number, get it plugged into Amazon, and facilitate the printing of an initial run of 200 copies of the final book.

This revised, expanded edition will number just under 200 pages, and measure slightly over 8 by 10 inches. “Annotated Cartoons by Davenport” will be the first publication of The Liberal University Press, based out of Silverton, Oregon. Additionally, in recognition of many more works of merit now forgotten, the Liberal University Press will serve as a conduit. Using the best technologies of today to reproduce for a new generation the thoughts, ideas and art of our ancestors.

Future titles include the collected works of Timothy W. Davenport, (1827-1911). The Cartoonist’s father was a prolific social commentator. His writing reflects a very unique view of different aspects of society from the 19th Century. Davenport’s second book, “The Dollar or the Man?” is slated for a similar treatment as this current edition. As well as a collection of fifty cartoons from the 1920s created by Portland Oregonian cartoonist Edward S. “Tige” Reynolds, (1877-1931).

During the three-year sliver of time captured by Davenport’s newspaper cartoons, the Republicans regained control of the White House in what many pundits have identified as the first modern political campaign. This was also a time of great economic debate, concern about special interests influencing the government, jobs, and of course the immigration issue. On the global scene, the United States was beginning to flex its military muscles, a conflict with Spain was starting to simmer, and a border dispute in Venezuela threatened war with Great Britain.

Through it all, Davenport was there, wielding his pen to spray a steady stream of caustic caricatures onto the notables and notorious of the global political scene. Davenport went on to author three more books; A second collection of cartoons in 1899 entitled The Dollar or the Man? The Question of To-Day; a travel book on his 1906 acquisition expedition to to Syria to purchase Arabian horses, My Quest of the Arabian Horse; and his autobiography, The Country Boy, written towards the end of his life in 1910.

Support our re-publication of this lost work by one of America’s most influential political cartoonists. Check out our rewards!