In 1895, William Randolph Hearst purchased the struggling New York Journal. His goal was to do to New York what he did to San Francisco, journalism-wise. One-time mentor Joseph Pulitzer, was now his direct competition. Few paid attention to the brash Westerner. But this dude from the pacific slope had a vast war chest behind him.

The archives have Hearst sending for many of his key Examiner talent from San Francisco, including Davenport, sports writer Charles Dryden and “sob sister” Winifred Black. Once set up and running, Hearst went about “staffing up” in earnest by hiring away any number of talented specialists from other papers. Many however, did not succumb to the temptation of Hearst’s generous salaries.

Apparently, he also asked those in his inner circle to pump their own contacts. This included Davenport himself, as evidenced by a newly discovered letter from Davenport in the Newberry Library in Chicago. It was written to fellow cartoonist John Tinney McCutcheon (1870-1949). McCutcheon, originally from Indiana, moved to Chicago early in his career. He ended up for years as staff cartoonist for the Chicago Tribune, where he became known as “The Dean of American Cartoonists.” 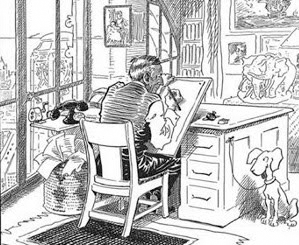 I became aware of McCutcheon while visiting Indianapolis, Indiana to research the Smith family archives of the Indiana Historical Society for “Davenport droppings.” On the last full day there, my host and Navy buddy Mark and I drove down to Richmond, Indiana, the self-proclaimed “Home of Recorded Jazz.” The Gannett Record Company was once there, where many of the early powerhouses of jazz first waxed phonographically.

The recording studio was long gone, but the local Wayne County Historical Museum was open for business. In the front room, Mark pointed out a display of numerous cartoons from the early twentieth century. The docent introduced me to the work Mr. McCutcheon, whom I had never heard of before.

Back home in Silverton, I searched the Web for McCutcheon, a Pulitzer prize-winning cartoonist, and discovered several of his collections of cartoons, downloadable from Google Books. John was much “softer” on his victims than Homer. But had that same “country boy” look and feel to his work. His “Boy in Spring” series, (including other seasons) was one of his most famous, as were his cartoons of “Bird Center” a swanky high society community of characters.

Eventually I ended up at the above-mentioned Newberry Library, final resting place of the J. T. McCutcheon family papers. As has been customary of late, I scanned through the listings for Davenport.

I found exactly one entry: “Homer Davenport – Job Offer, 1895.” I thought it odd that Homer would be asking John for a job, having just been sent to New York City. So for a nominal fee, I ordered a copy of the item. Sure enough, it’s the other way around! He was trying to get John to move over to Hearst! Below is the text of Davenport’s letter to McCutcheon, written on letterhead from the New Hoffman House (right), the “Absolutely Fire Proof” New York hotel Davenport was temporarily living in at the time:

My Dear Sir: You are no doubt surprised to see that I am in New York, but come on to the city with Mr. Hurst and will remain I suppose in this city for the next few years. I rather like it here but of course it is not Frisco. We expect to have a great paper out of the “Journal” soon.

Mr. Pruitt Share is in charge of the art dep. and among the crew are Trobridge, Weil, Anthony, Kerr and several I don’t know.

I wish you were out here. Hurst is the greatest man in the world to work for, and if you are with him once you would work for no other. He has just bought $500,000 worth of new presses among them a color press unsurpassed by any now in use.

How are all of our old friends in the different art departments? Let me hear from you at your earliest convenience. Tell me if you want to come to New York and I will see that you get work on a paper that will be the paper in short order.

No doubt, Davenport and McCutcheon became friends while the former was working in Chicago in 1893 during the Columbian Exposition. Of the names mentioned, (Pruitt, Trobridge, Weil, Anthony and Kerr), I have found nothing yet. Possibly due to the fact of Davenport’s notoriously poor spelling, (in this letter, he opens with an”l” instead of “t” in McCutcheon’s name, and refers to the world’s greatest boss as “Mr. Hurst”).  At any rate, McCutcheon was not swayed by Homer’s offer. But he felt obliged to keep the letter!

What is notable was Davenport’s mention of the new “unsurpassed” color printing press. In William Randolph Hearst: A New Appraisal by John K. Winkler, the author relates that this new press was custom-built, and immediately after, the Journal’s circulation sky-rocketed.

“The leap in circulation was especially noticeable when the Journal installed a markedly improved color press, a product of the combine inventive skills of George Pancoast, experts of R. Hoe & Company, and of Hearst himself … The result was that by the fall of 1896, the Journal possessed a special Hoe color press capable of printing from four to sixteen pages in color.”

McCutcheon was not the only old pal Davenport recruited. He also snagged his former Portland Oregonian colleague, columnist James J. Montague. Montague, also a poet, penned the poem When Davenport’s in Town, which was reproduced in Davenport’s 1911 autobiography, The Country Boy.